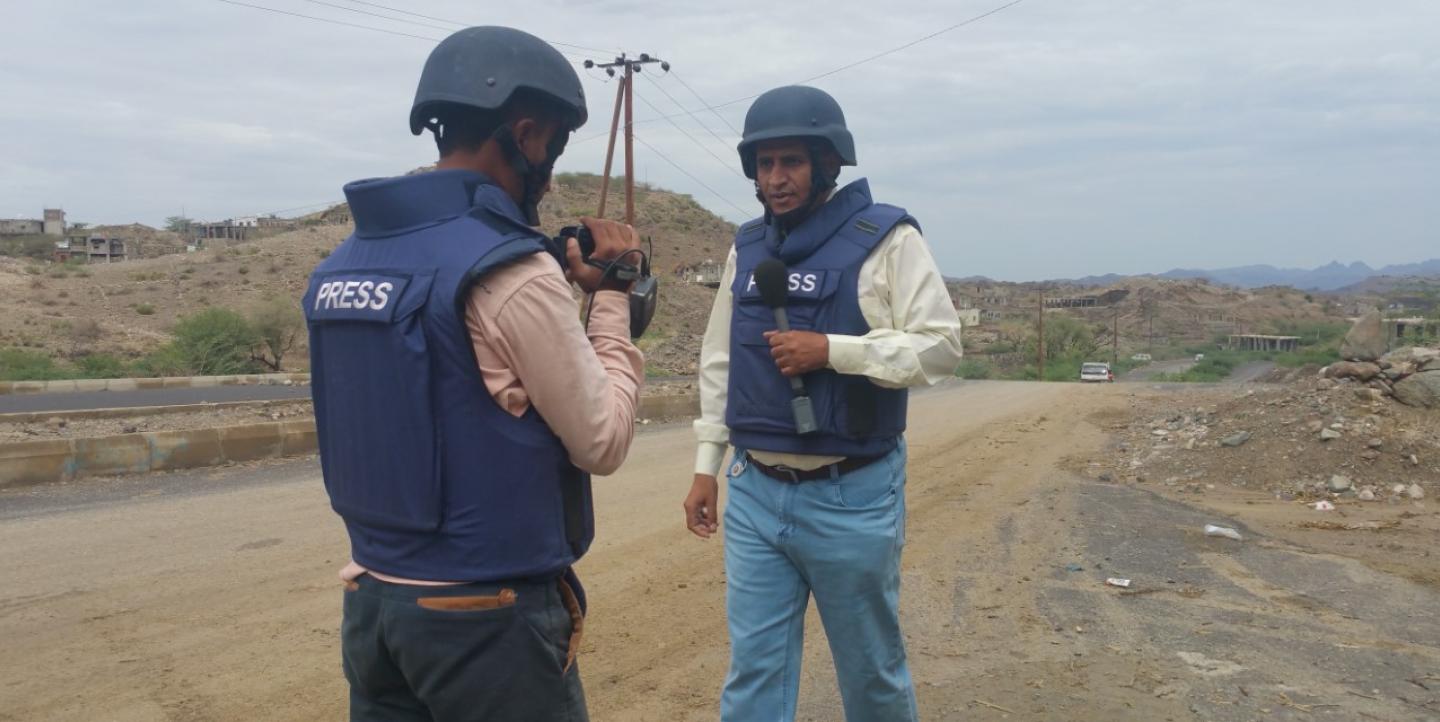 The Yemeni Journalists Syndicate documented in its 2021 annual report on media freedoms a number of serious violations of freedom of opinion and expression in Yemen.

The report shows the continuing dangers against the press and journalists, and the poor, unsafe and hostile media environment towards journalistic work across Yemen.

The Syndicate documented 104 cases of violations against media outlets, journalists, photographers and their properties from January 1 to December 31, 2021.

The types of violations committed include the following:

19 cases of banning journalists and confiscation of their equipment (18.3%)

6 cases of denying detained journalists from the right to medical treatment and care (5.9%)

5 cases of suspension of media outlets and journalists’ dues (4.8%)

The cases of freedom detention were as follows:

Media activist Hala Badawi is still detained by the legitimate government in Hadhramaut, while journalist Muhammad Qaid Al-Muqri has been forcibly disappeared by Al-Qaeda in Hadhramaut since 2015.

Journalists Abdel-Khaleq Amran, Tawfiq Al-Mansoori, Akram Al-Walidy, and Harith Hamid have been unjustly sentenced to death based on a politically-motivated ruling which the Syndicate rejects and demands its repeal.

The Syndicate documented 12 cases of trials of journalists and media outlets, including 8 trial (66.6%), and two cases of judicial rulings (16.7%), of which a Saudi court ruling sentenced Yemeni journalist Ali Mohsen Abu Lahoum to 15 years in prison, and a ruling with regard to shutting down a search engine. The ruling was issued by the Capital Municipality Appeals Court Sana'a. Moreover, two cases of summons and investigation (16.7%) were reported.

The Syndicate documented 6 cases of depriving the abductees from the right to health care and medicine in Houthi prisons, and 5 cases of torture of abductees.

The Syndicate documented 5 suspensions of media outlets and journalists’ salaries, including suspension of 3 media outlets, as happened to (Bandar Aden and Adania FM), and search engine (Sahafatak), as well as two cases of suspending employees’ salaries.

The issue of the legitimate government's refusal to pay the salaries of state media workers in Houthi-controlled areas has been unresolved for six years, affecting more than a thousand employees.

The Syndicate recorded 4 killings of journalists in Aden, in two horrific terrorist incidents which murdered Journalists Ahmed Saleh Bu Salih, a member of the Syndicate and press secretary of the Governor of Aden, photographer Tariq Mustafa, journalist Rasha Abdullah Al-Harazi and journalist Ahmed Bo Rass. The perpetrators of these crimes are still unknown.

The violations presented in this report reveal some important indicators related to the journalistic work environment at the legislative, security, professional and economic levels. The most important of which are the following:

1- Journalists are tried under the laws of crimes, penalties and combating terrorism, not under the Press and Publications Law, and in specialized courts concerned with issues of terrorism and national security, as is the case with journalists detained in Sana’a, as well as journalists who are sued in Hadramout. These laws may order the death penalty for a journalist in connection with a publishing case, as happened with the journalists, Yahya Al-Jubeihi, Abdul-Khaleq Amran, Tawfiq Al-Mansoori, Akram Al-Walidy, and Harith Hamid.

2- Many journalists and foreign media correspondents complain about the restrictions imposed by the Houthi group on journalistic work through illegal internal regulations that impose restrictions, control and sums of money on media work.

3 -Detained journalists live in harsh, arbitrary, and illegal detention conditions, and they are denied health care and subjected to torture without legal protection.

1- The warring parties’ repressive and violent treatment of journalists, classifying them as the enemy, and tightening the iron grip on journalistic work, as the various authorities do not believe in the right to journalistic work and freedom of expression, treat journalists with hostility and incitement, and insist on engaging them in political conflicts on the basis that ‘if you are not with me you are against me’.

2 -The presence of censorship on the work of journalists, monitoring of what they write on social media, summoning some journalists because of what they write for the media outlets they work for, and arresting them for working with foreign media, not to mention the exposure of many colleagues to threats and incitement on the grounds of their journalistic activity.

3- The absence of media pluralism as the parties that control particular territories prevent any journalistic activity or independent or opposition media. This matter led to the suspension of nearly 80 newspapers, magazines and radio stations since the beginning of the war, not to mention the blocking of more than 200 local and external news websites in Yemen .

1-The legitimate government refuses to pay the salaries of journalists and workers in the state media in areas outside its control in violation of its legal and moral responsibility towards the employees.

2-Many journalists work without job contracts, and for a low financial reward, and many local and foreign media refuse to sign contracts with them. The foreign media also do not provide health insurance and work risk insurance, and ignore occupational safety and training procedures in this aspect.

3- Weak economic capabilities of the media, and the absence of a fair distribution of advertisements.

1- The absence of independent press, the warring parties’ control of state media, and launching media outlets affiliated with the parties to the conflict contributed to the spread of hate speech and incitement and the absence of professional journalism in many publications.

2- The absence of honor codes and codes of conduct in the media.

- The Yemeni Journalists Syndicate calls on the parties to the conflict to stop the systematic policies aimed at targeting the press and journalists, respect freedom of opinion and expression and the right to obtain information enshrined in the Constitution of the Republic of Yemen and the Press and Publications Law No. 25 of 1990, and allow and protect the diversity of media outlets.

The Syndicate calls on the Houthi group to release all journalists it has kidnapped, abolish the unjust death sentences, and end repressive practices against journalists and illegal regulations restricting media freedom.

The Syndicate calls on the legitimate government to investigate all violations committed by government agencies and bodies and hold those involved accountable and stop targeting journalists.

- The Syndicate calls on the Southern Transitional Council to stop harassment of journalists and the media, and to hand over the state press institutions.

-The Syndicate calls on all organizations concerned with freedom of opinion and expression, and the Office of the UN Envoy to Yemen to support journalists, adopt their issues and pressure all parties to respect the freedom of expression.